References to NFPA 72 refer to the 2016 edition

Following the spacing rules of NFPA 72 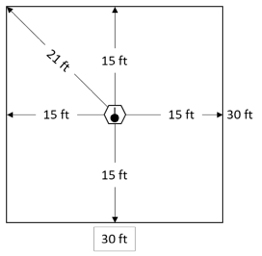 Following the spacing rules of NFPA 72, Chapter 17, specifically Section 17.6.3.1.1, we know our detector layout must follow one of the two requirements below.

(1) The distance between detectors shall not exceed their listed spacing, and there shall be detectors within a distance of one-half the listed spacing, measured at right angles from all walls or partitions extending upward to within the top 15 percent of the ceiling height.

(2) All points on the ceiling shall have a detector within a distance equal to or less than 0.7 times the listed spacing (0.7S).

Assuming we have a heat detector that has a listed spacing of 30 feet, the illustration above shows that we have followed both requirements.  The detector is no more than one-half its listed spacing from any wall measured at a right angle.  In addition, no space on the ceiling is more than 0.7 x the detector’s listed spacing, in this case 21 feet. 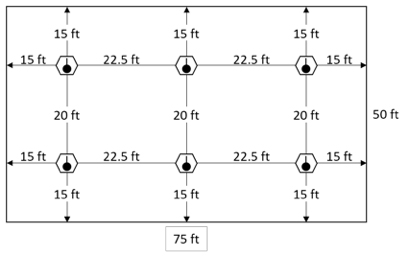 Up to this point we have been working with square rooms, but this is just as applicable to rectangular spaces as illustrated.

What if the space the detector needs to be placed in is an irregular shape?

As you can see, there is no real difference other than a longer dimension in width.  The idea is the same, but what if the space the detector needs to be placed in is an irregular shape?  A space that is not square or rectangular, or perhaps rectangular and narrow.  In those cases, we go on to the next requirement in the fire alarm code, 17.6.3.1.2.  It is appropriately titled “Irregular Areas” and states “For irregularly shaped areas, the spacing between detectors shall be permitted to be greater than the listed spacing, provided that the maximum spacing from a detector to the farthest point of a sidewall or corner within its zone of protection is not greater than 0.7 times the listed spacing.”

Look at the detector curve illustrated, we see that there are different dimensions on the curve that start with the standard spacing of 30-foot by 30-foot and works its way down to the 42.4 dimension for very narrow spaces.  So, here’s the quick explanation on how we can use this curve to our advantage.

Let’s say we have a space that has a dimension of 10 feet wide and 150 long with a ceiling 10 feet or less.  We’ll call it a long narrow tunnel.  We’ll also say that this tunnel requires heat detectors in it because of local building codes.  Now assuming we have heat detectors listed for this environment and those heat detectors have a listed spacing of 30 feet, here’s how it would look if we use the requirements of 17.6.3.1.1 as we did in the Detector Layout Part 1.

As you can see we followed the requirements and “luckily” we ended up with a detector layout that is perfectly spaced at 30-foot intervals. Now let’s apply the detector curve to the same tunnel to see what that looks like.

I want to call your attention to the number “41.2.”  In this narrow 10-foot space, our 30-foot detector spacing is now allowed to be 41.2 feet. You may be thinking...30 feet and 41.2 feet are NOT the same and the spacing won’t work out so what gives?!?  Well, there’s a little geometry magic going on.  It becomes clearer when you get it all on a scaled drawing and measure out the distance from the upper left corner to the closest detector.  That distance will not be more than 0.7 x the detector’s listed spacing of 30 feet or 21 feet.  That is the beauty of using this curve.  Let’s see how the same tunnel will look using the curve and spacing from the model above.

To make it a little easier, I decided to use no more than 40-foot spacing for my detectors.  That made the spacing between all four of the detectors a lot better.  However, even if I would have gone with 41.2 feet as my spacing per the detector curve, it would have still worked out close to what I laid out above: 4 detectors and no spot on the ceiling more than 21 feet away from the closest detector.

How do I know no spot on the ceiling is farther than 21 feet away from a detector in our tunnel?  I can test it using the Pythagorean Theorem.  In case you are unfamiliar with the theorem, it is c2 = a2 + b2.

Using the theorem, I can figure out the distance from the upper left corner of our tunnel to the center point of the closest detector.  We already have two of the measurements just from looking at our layout.  The first measurement, which we will designate as “a” is 5 feet from either the north or south walls.  The second measurement, which we will designate as “b” is 20 feet from the detector’s center point to the far-left wall.  Using those two measurements we can use the theorem to solve for “c” (our measurement from the corner of the space to our heat detector) to see if we have violated NFPA 72 detector spacing rules.

Using the theorem, we find that the farthest spot on the ceiling is approximately 20.61 feet away from the closest heat detector in our very narrow tunnel.  According to 17.6.3.1.2, we are code complaint because that distance is less than the heat detector’s listed 30-foot spacing x 0.7 (21 feet).

Our last example was for an irregular space, but it was still a rectangular space.  What about a non-square or non-rectangular space?  Believe it or not, that’s a little easier because it’s just measurements.  In most scenarios, there will be no need to use the Pythagorean Theorem.  You’ll just need to do some quick multiplication to get the information you need and then you can place your heat detectors where you need them.

To read the next article in this series, Link to: #127 – Fire Alarm Detector Layout Part 3: Solid Joists

To read the previous article in this series, Link to: #114 – Basic Fire Alarm Heat Detector Layout